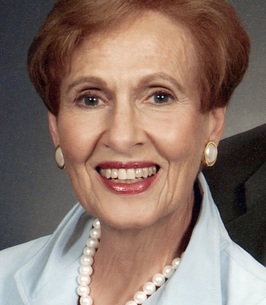 Barbara Hocker passed away peacefully on Saturday, July 2, 2022 in Colorado Springs, Colorado. She was a devoted wife, loyal sister, loving mother, and proud grandparent. Barbara was also a woman of deep faith who loved her family and cherished her friends from her church community and from years of military travel around the world. She will be missed for her joy of life and her generous spirit.

Barbara was born and raised in Wakefield, Kansas, the younger of two daughters to Edgar and Eleanor Siemers. She attended Colorado Women’s College in Denver on a violin scholarship, then transferred to Kansas State University in Manhattan, Kansas where she pledged Kappa Kappa Gamma and earned her degree in Education in 1957. Barbara’s first teaching assignment was in Panama City, Florida. She later moved to Fort Lauderdale and enrolled in a Master’s Program in Education at the University of Miami while continuing to teach. It was during this time that she developed an expertise as a Reading Specialist.

Barbara's sense of adventure brought her to Bamberg, Germany in the fall of 1961 as a Department of Defense school teacher. Soon after arriving, she met and married John Hocker, and together they travelled the world in a 28-year military career. Their first assignment was Naples, Italy where John served as an admiral’s aide and Barbara played host to dignitaries including Lady Bird Johnson. Barbara learned German at the Defense Language Institute and they returned to Germany for John’s masters studies. Their assignments included stops in Paris, Germany, Belgium and the Far East. During the Vietnam war, Barbara moved to Bangkok with her two young children, to teach at the International School of Bangkok in Thailand to be near John. At every location, she was quick to make friends, join in Bible studies, and engage in the local culture. On one assignment they befriended an Italian chef and organized several trips from Belgium to Italy to attend his cooking school with friends and co-workers.

Through her travels and life experiences at home and abroad, Barbara became fluent in German and conversational in French. She was an accomplished tennis player bringing home more than a few trophies from base competitions. During their assignment to West Point, she and John became certified ski instructors which served them well during 6 years in Europe and many trips to the Alps with ski clubs.

After the military, they settled in Bethesda, Maryland in 1985, where Barbara worked in real estate. She and John began attending Fourth Presbyterian Church nearby which became their church home for the next 35 years. Together they chaired the New Members Committee for nearly 25 years, and Barbara also served as the President of Women of Fourth and as a Deacon. She later served as an American Blessing with Community Bible Study International for several years. Those who knew and loved her will remember her kindness, hospitality, and warm smile. She enjoyed taking in the arts of the DC area – concerts and plays at the Kennedy Center and Wolf Trap – and frequent visits to the National Gallery of Art. What they enjoyed most was hosting visitors from around the world and sharing DC with others.

A Memorial Service for Barbara Hocker will be held on Friday, September 16, 2022, 10:00 am at Fourth Presbyterian Church, 5500 River Road, Bethesda, MD 20816, with a reception to follow. Guests are welcome to also attend the Internment at 2:00 pm at Arlington National Cemetery, Arlington, VA. PLEASE NOTE: All in attendance for the Interment at Arlington National Cemetery MUST arrive no later than 1:15 pm with valid ID.

Flowers are being received by Fourth Presbyterian Church the day before in the afternoon of September 15, 2022, before 4 pm, or the morning of Friday September 16, 2022, no later than 9 am. Memorial contributions in honor of Barbara Hocker’s memory may be given to Community Bible Study International: https://www.communitybiblestudy.org/vdonor/donor-honorarium.html?classname=GENERAL%20FUND&segmentCode=MA0121OT&projectCodes=CBSI