To share your memory on the wall of David Ebssa, sign in using one of the following options:

Print
David (Fouad) Galmo Ebssa was born on July 24, 1959 in Dire Dawa, Ethiopia. He lived in Germany and France before calling the United States home for nearly 40 years.

There is so much that can be shared about David. There were three thin... Read More
David (Fouad) Galmo Ebssa was born on July 24, 1959 in Dire Dawa, Ethiopia. He lived in Germany and France before calling the United States home for nearly 40 years.

There is so much that can be shared about David. There were three things that were most important, and most consistently shared as the phone calls and messages came pouring in after his death. First, friends and family alike recounted stories how he quietly and discretely helped each of them, never sharing the circumstances people were facing nor talking about his efforts to help them. Even strangers benefited from his care and ability not to judge anyone’s circumstances. Second, his wide smile was unforgettable, and his laughter was contagious. He always had an encouraging word and a reminder that “you have to keep laughing, because that is how you keep going.” Finally, David was steadfast in his faith in God, encouraging others to do the same, and reminding those who forgot that God is always there for us. He used to start his day with the same prayer "God I am blind, please lead me". Even in his final days, “by the grace of God” was on his lips.

David died on January 24, 2021. He is survived by his loving sister, nieces, nephews, and a host of family and dear friends. At the end, all there is , is love.
Read Less

Receive notifications about information and event scheduling for David

We encourage you to share your most beloved memories of David here, so that the family and other loved ones can always see it. You can upload cherished photographs, or share your favorite stories, and can even comment on those shared by others.

Plant a Tree in Memory of David
Plant a tree 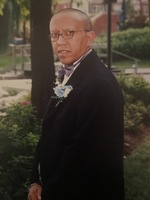