To share your memory on the wall of Edward Youth, sign in using one of the following options:

Dedicated and loving husband, father, and friend, Edward passed away on December 18, 2020. He leaves behind Helen, his wife of 67 years, three children (Gail, Leanne, Howard), three grandchildren (Alessandra, Zachary, Thomas), daughter-in-law Marta, and many other family and friends. Called "Steady Eddie" by his wife and best friend, Ed imbued the qualities of honesty, reliability, and sincerity. In relaxed settings, he was also known for his rather zany sense of humor. (For example, when passing a cemetery, he sometimes noted: "People are dying to get in there.") Over the years, Ed also lavished his attention on eight canine family members, from royal standard poodle to chiweenie.

Ed was highly skilled and technical, accomplished both at work and during his spare time. By himself during weekends, he carved a home office and entertainment room out of a two-car garage, among other projects, captained the family sailboat on the Chesapeake, and was a private pilot with an instrument rating.

In the 1950s, Ed served in the National Guard and then in the U.S. Air Force for four years. He spent a year of his service in Korea during the conflict. After the war, he worked as an electrical engineer on aeronautic components and managed a defense contracts division. Later, he went into business for himself as a sales representative for the types of components he worked on in years prior. Later in his career, Ed taught computer subjects at the Friendship Heights Center, and was a volunteer docent at the Smithsonian Castle.

Ed’s goodness and genuine, loving nature will be sorely missed by friends and family. He provided a fine example for his children and grandchildren, who will carry his memory and lessons with them as they move forward, including his advice to never look back for long, or, as he would say: "Never say I could have, should have, or would have."

Ed's health had been failing for some time and he spent the last two years of his life in the Hebrew Home of Greater Washington.
Read Less

Receive notifications about information and event scheduling for Edward

We encourage you to share your most beloved memories of Edward here, so that the family and other loved ones can always see it. You can upload cherished photographs, or share your favorite stories, and can even comment on those shared by others.

Your friends at American Bird Conservancy

Posted Dec 22, 2020 at 05:46pm
We hope this tree-planting will be a consolation to the Youth family. Our hearts are with you at this difficult time.

3 trees were planted in the memory of Edward Youth

Posted Jan 06, 2021 at 08:21pm
Thinking of you with our own heartfelt memories of conversations with Ed. May your memories bring you solace. 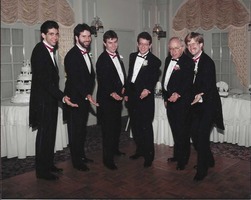