To share your memory on the wall of Harry Lincoln Jr., sign in using one of the following options:

Provide comfort for the family by sending flowers or planting a tree in memory of Harry Lincoln Jr.

Provide comfort for the family by sending flowers or planting a tree in memory of Harry Lincoln Jr.

Receive notifications about information and event scheduling for Harry

Print
Please be aware that masks and social distancing will be required.

We encourage you to share your most beloved memories of Harry here, so that the family and other loved ones can always see it. You can upload cherished photographs, or share your favorite stories, and can even comment on those shared by others.

Posted Nov 20, 2020 at 12:57pm
A kind and caring man who obviously loved the Lord Jesus Christ.
He will be greatly missed.
Mary & Joe Clark
Comment Share
Share via:
VF

We will always remember Harry’s calm, warm and inviting smile when we saw him at church. And we so enjoyed our discussions of the Scriptures and theological issues as well as congregational needs at church during many lunches and dinners with him and Carolyn. Phil also enjoyed comparing notes with Harry on the annual changes in tax law, lol. And we always looked forward to seeing him when we attended programs at the Strathmore Center. We cherish the memory of his friendship and certainly look forward to seeing him again in heaven someday. Phil and Vicki Fanara 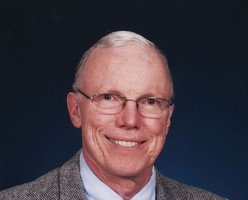