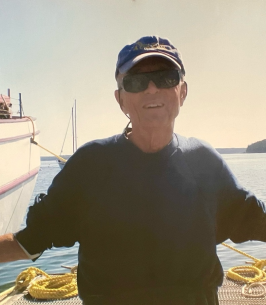 Howard W. Solomon of Bethesda,MD, and Bar Harbor, ME, laid down his gavel for the last time Sept. 27 at the age of 91. A retired federal arbitrator and mediator, Solomon was known as thoughtful and fair, bringing a warm smile into day-to-day life. Unafraid to defy convention, Solomon could get the most bitter disputants to compromise, with clear reasoning, principled compassion, and a well-timed joke.

The son of prominent New York internist Dr. Harry A. Solomon and Ruth Solomon (née Wulfsohn), Solomon was born on the upper east side of Manhattan in 1931. He attended Friends Seminary, a Quaker institution, and was graduated from Yale in 1952.

His patrician upbringing notwithstanding, Solomon defied convention with wide-ranging interests. An avid amateur athlete, basketball coach, and American Youth Hostels bicycle trip leader of multiple groups to Europe in his late teens and early twenties, Solomon freely admitted that he joined the U.S. Army after earning his juris doctor from Columbia Law School in order to avoid having to pass the New York bar exam (passage was automatically granted after two years of military service). Solomon excelled in his service and received awards for marksmanship as well as the Good Conduct Medal.

After the Army, Solomon joined the Federal Mediation and Conciliation Service as a junior attorney, resolving labor disputes between unions and corporations through negotiation and compromise. In a letter to President Lyndon B. Johnson, a union president representing 23,000 workers in a 1967 dispute with tire manufacturer Uniroyal, Inc., wrote that Solomon “worked feverishly in the public interest in attempting to aid the parties in resolving their problems and arriving at an equitable settlement” involving pay and worker protections. Uniroyal’s management also commended the young mediator in a letter. “Your quiet, unobtrusive and persistent involvement was a significant catalyst to resolving the hard core and appearingly unsolvable issues remaining between the union and Company.”

Promoted from a field attorney in St. Louis to a federal commissioner in the midwestern heart of manufacturing, Dayton, Ohio, Solomon met Dolores (“Dee”) Stuerenberg, a Cincinnati native who was society editor of the Dayton Journal-Herald and a former nationally-ranked tennis player. They married in 1965.

Dee urged Howard to accept an assignment with the U.S. State Department’s Agency for International Development in New Delhi, India, in 1968. The couple embraced the rich culture and kindness of their Indian friends and colleagues. Dee relished Embassy social life on and off the tennis court while the couple raised their young daughter Beth and welcomed their son Harrison, who was born in New Delhi.

Returning with the family to Washington, D.C. in the early 1970s, Solomon was given assignments of increasing responsibility in the federal labor relations sector, rising to helm the Federal Service Impasses Panel, a presidential commission charged with adjudicating major labor disputes. While the forward-thinking Solomon privately supported many progressive organizations such as the Sierra Club and Greenpeace, he was respected by colleagues across the political spectrum. Reagan Administration Secretary of Labor William E. Brock commended Solomon, writing, “You are indeed a credit to this Administration.”

Tall and sinewy, Solomon was a lifelong environmentalist, taking public transportation to the office every day from the family home in Bethesda to downtown Washington, a lengthy trip. Howard drew barbs from his wife and his two sisters Nina S. Hyde, the longtime fashion editor of The Washington Post, and Loire Valley, France-based Marquise Suzanne de Brantes, for wearing running shorts during his commute to the office during hot summers. Solomon met those grimaces with a laugh.

After retiring in his late 50s, Solomon began spending more time in Bar Harbor, Maine, eventually luring Dee first to a tent on the beautiful coast inside Acadia National Park, and later a house they built nearby, looking out on Frenchman’s Bay. The couple not only enjoyed Acadia’s natural treasures but actively worked to protect and enhance them for others. Indeed, Solomon and others founded the volunteer corps that built and maintained park trails alongside the National Park Service. Later, Solomon served on the board of directors of Friends of Acadia, supporting initiatives such as the launch of a substantial natural-gas-powered bus fleet to reduce car traffic in the park.

In his “retirement,” Howard studied jazz piano, eventually filling the lounge of the Balance Rock Inn in Bar Harbor several nights each week with the beautiful melodies of jazz standards sung by Sinatra, Ella and Rosemary Clooney. Later in life, Howard’s favorite Sunday activities were listening to Donnie McKethan’s landmark radio jazz show “The American Songbook” on public radio station WPFW while reading the New York Times with Dee on the granite rocks of Sand Beach in Acadia.

After Dee died in 2016, Howard shuttled between Bethesda and Bar Harbor, spending more time at the piano than on the hiking trails and bike paths of Acadia. In his last days, when he needed the assistance of nurses at Suburban Hospital, he kept a twinkle in his eye. “How are you feeling today, Howard?” asked a nurse two days before he drew his last breath. “Fantastic,” he smiled. Trying to make Solomon as comfortable as possible, the nurse said, “Howard, I’m going to put my arm on your shoulder and pull you toward me, OK?”

Near his last day, Howard was told by his family that his nurse’s name was Ryan, and that Ryan was doing a great job. “This is my lucky day,” he said.