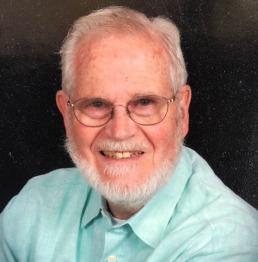 James A. Harris, Jr, age 86, died May 12, 2022 near Montgomery Village, Maryland where he resided with his wife, Sara. Jim was born in Minneapolis, Minnesota on June 29, 1935, the son of Helen Ruth Street Harris and James Arthur Harris. In the 1940s, he moved with his parents to Virginia, graduated from Western High School in Washington, DC, and, In 1958, received his B. A. from Marietta College, where he was President of Alpha Tau Omega fraternity, rowed crew and was listed in Who's Who Among Students in American Colleges and Universities. After graduation, Jim worked in banking in Cleveland and sang in the the Cleveland Orchestra Summer Chorus, and for several years, he was a member of the United States Naval Reserves. Jim had an opportunity to go into the newly developing Information Technology field and moved to Virginia where he worked at the Pentagon. On an evening sail out of Annapolis, he met Sara, who became his wife in 1966. They moved to Bethesda where Jim began logistics work with a team that served several companies over many years.

Devoted to his family and friends, Jim was a loving and gentle family man. He enjoyed sports, genealogy,
and a wide variety of music, singing in the Cathedral Choral Society for several years and greatly enjoying and supporting choral, classic and jazz music. Jim was a Vestry member at The Church of the Ascension, Gaithersburg, and, for many years, assisted the Montgomery County Board of Elections with election preparations, post-election reviews and as a Chief Election Judge. His family, his greatest joy, was devoted to Jim, who shared fun, fine moments including sports, musical performances, birding and meaningful times together.

In lieu of flowers, the family would be grateful for remembering Jim with a memorial contribution to the Chesapeake Bay Foundation at www.cbf.org/memorial; Washington Performing Arts or Caring Matters.