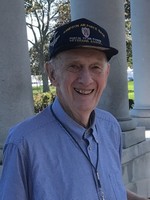 On Friday, December 11, 2020, John R. Howe, devoted husband and father of two children, passed away at the age of 86. Described as kind, gentle, and loving, he is survived by his wife of 62 years, Patricia A. (Herman) Howe, son John C. Howe, and daughter Amy E. (Howe) Geisel (Guy), and five grandchildren, Justin, Andrew, Hunter, Forrest, and Jessica and two step grandchildren Melinda and Pamela.

John, an only child, was born May 7, 1934 to Jeannette and John W. Howe in Portsmouth, NH. He attended Portsmouth High School (‘52), and graduated from the University of New Hampshire. He proudly served in the US Air Force. He loved his job at Hood milk, as he earned his Master’s in Business from Boston University. He enjoyed his personnel work with his jobs at Peter Bent Brigham Hospital in Boston, MA, Cornell University, American University, and eventually retired from Pepco Electric Company.

Always up for an adventure, he adored traveling the globe with the love of his life, Patsy. He made many trips to watch his beloved sport teams at all levels of play, from major league teams all the down to his grandchildren’s sporting events. His love of music came from his father, and he proudly attended all of John and Amy’s band events and competitions, recording them all to listen to again.

John was a very outgoing, patriotic man who loved volunteering for many organizations and getting to make new friends. Most recently were also some of his favorites -- the Honor Flight Guard at BWI airport and the USS Albacore in Portsmouth, NH. During his brief time in Ithaca, N.Y., he delighted in “tooting around” in his Falcon convertible and “Freddie II”, his boat. He was a proud tour guide to all family and friends and eagerly shared favorite sites of Washington, D.C. to our visitors.

In lieu of flowers or other tributes, the family asks that you consider a memorial donation to The American Brain Foundation (ABF) See link below.

At this time, there is no planned memorial service.