To share your memory on the wall of Michael Parrish, sign in using one of the following options:

Provide comfort for the family by sending flowers or planting a tree in memory of Michael Parrish.

Provide comfort for the family of Michael Parrish with a meaningful gesture of sympathy.

In his youth, Michael sang in the Christ Church boys choir in Lexington under Robert Quade. An organist from an early age, he studied at the Royal Academy of Music and the Royal School of Church Music in London as an English Speaking Union Exchange Scholar during his final year of high school. He was a graduate of the University of Kentucky, where he studied organ with Arnold Blackburn, and subsequently studied at the Royal School of Church Music Course for Overseas Musicians. His teachers included Christopher Herrick, Sir George Thalben-Ball, Dr. Herbert Howells, Dr. Gerre Hancock, and Dr. Paul Calloway.

As guest organist with The Choir of St. Michael and St. George (St. Louis), he played services in St. Paul's and Canterbury Cathedrals, Westminster Abbey, and St. George's Windsor. Michael often gave recitals, including on the great organs of Washington and New York City.

Michael was the organist and choir director of Washington Hebrew Congregation for 23 years. He also served at St. Paul's Rock Creek, First Church of Christ Scientist, and All Souls Memorial Episcopal, all of Washington, DC; The Old Presbyterian Meeting House of Alexandria, VA; St. Dunstan's Episcopal Church of McLean, VA; and First Presbyterian Church and Broadway Christian Church of Lexington, KY. He held positions in the American Guild of Organists, District of Columbia chapter, from 1981 to 2004, including dean from 1995-1998. He was also active in the Anglican Association of Musicians, the Guild of Temple Musicians, was on the fund raising panel for the Virginia Arts Council, and served on the Board of Directors of the Performing Arts Association of Alexandria.

Receive notifications about information and event scheduling for Michael 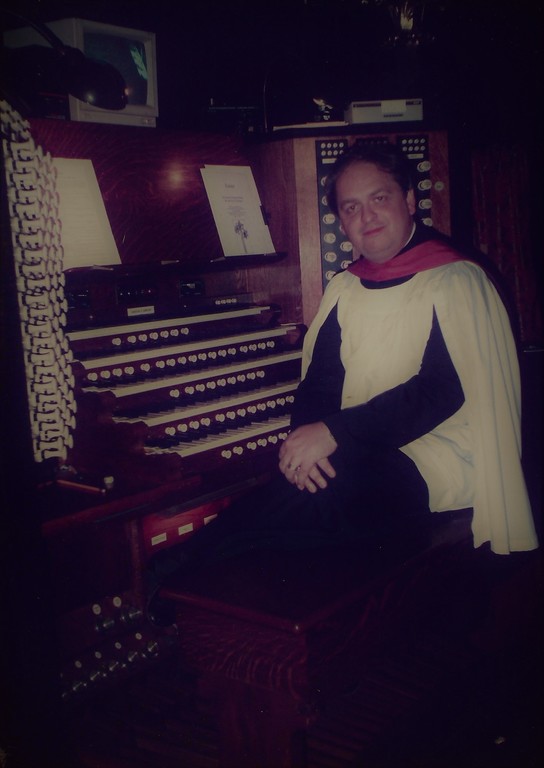 We encourage you to share any memorable photos or stories about Michael. All tributes placed on and purchased through this memorial website will remain on in perpetuity for generations.

Honor the life of Michael Parrish by planting a memorial tree.
Plant a Tree in Memory of Michael
Planted in the area of greatest need
PS

Dear Alice, Michael and William,
Your husband/dad was my dear high school friend. He actually let me sit on the bench while he practiced and directed me when to pull the stops. Amazing - just a high school boy and already organist at Broadway! I think he was about 15 or 16 when he came to us. We all LOVED him. Of course, his talent was too immense to be contained in Kentucky, so he had to leave. Bad timing, though! Just when I was ready to get married, he was in ENGLAND studying under some renowned teacher! Lucky for us, Alice had just finished her recital and had all these wonderful organ pieces ready to go and did a masterful job on the Broadway organ for our wedding. I have it all on tape. One time, Mike was playing so awesomely LOUD that one of the decorative rosettes on the ceiling came loose and crashed down to the floor right behind the organ! (at least I think that was Mike). E. Power Biggs forever! I only know that name because of Mike). B. Michael Parrish was a huge part of my teenage years and I always remember him laughing at my big mouth bullfrog joke. BMP brought so much joy to everyone who ever heard him play. I've missed him all these years while he was away from Kentucky but I am glad he'll be playing organ for me while I sing in the heavenly choir. Love to you all.
Comment | Share Posted Dec 19, 2020 at 09:49pm via Condolence

My deepest condolences to the family. I have so many fond memories of Michael during my youth group days. He didn't want any of us to touch the Church's organ. So talented. Rest in Heavenly Peace.