To share your memory on the wall of Thomas Carpenter, sign in using one of the following options:

Receive notifications about information and event scheduling for Thomas

Donations are being accepted for: MONTGOMERY HOSPICE INC.

We encourage you to share your most beloved memories of Thomas here, so that the family and other loved ones can always see it. You can upload cherished photographs, or share your favorite stories, and can even comment on those shared by others.

Posted Feb 08, 2021 at 06:20pm
There are some cultures where a person is not considered gone until their loved ones say a proper goodbye to them. It is in that spirit that I write these words. I still do not want to admit that Tom is no longer with us but sometimes we have to say goodbye even though it is so hard to do.

My heart is heavy with the realization that Thomas Carpenter is no longer with us. When I moved into the house across the street from Tom, Audrey, and Nancy in 2004, I was hoping that my husband and three young children would have neighbors who would become friends. Instead, we found Tom, Audrey, and Nancy to be neighbors who became family. I am still mourning Audrey and Nancy and now I have to add Tom to the list. This is too much to bear. This is the end of an era.

Tom is one of the nicest, kindest, and most generous people that I know. Tom always had a beautiful, welcoming smile on his face. My children have memories of some of the kind things that Tom did. They told me how Tom offered them refreshments, how he would play games on the computer with them, and how he would tell them stories to make them feel better. Tom was also had a generous. He shared the people he loved with us. Not once did Tom make my children and I feel unwelcome even though it must have been hard to have young children running around his house and making a lot of noise.

Tom's love for his family was immeasurable. He was so proud of his daughter, Little Audrey, and his granddaughter, Brianna. He would tell us about how happy he was to have his daughter living so close, how well she cared for him, and how much he cared for her. Tom would sit on his computer for hours looking and editing pictures that he had of Brianna's performances. A great big, smile would come over his face when he talked about how well Brianna performed and her latest trophies. Tom would talk at length about how hardworking and disciplined Brianna was, how accomplished she was, and how much he loved to watch her perform.

My world became smaller and sadder when Tom left this earth. I hope that Little Audrey and Brianna accept my condolences at this very difficult time.

Posted Feb 04, 2021 at 10:36pm
r. Carpenter made this world a much better place and had led his life nothing short of honorable. Being a man of very few words, him mastering the art of leading by example and lways put others first. He raised the bar high and the the rest of the family took my brother and I under their wings, without any 'strings" when they simply didn't have to. To have invested so much in conditioning us and providing a sense of normalcy for almost my entire life I will always hold a candle to him. The world changed was most definitely a better place without him, yet he instilled the fundamentals of not just maintain your dignity, but also was very much a visionary and only sought to keep us all together as a family unit. Shall he always remain in memory for providing the future generations in the family as well as the vast amount of his contributions to society. He was one of a kind and for the grace he showed to anyone and anyone prove alone that he was a man who went out of his to help anyone while simultaneously empowering the unfortunate with ugh craft. May be with his wife and find other lost ones as worked and w3 take care it many people...We all miss him and may he enjoy the the fruits lavishly even on the other side. Most? He was for sure standout as the gentleman he had a very keen sense and would yo 9 his way to heecyend a helping hand and his insight which will surely live on Im lucky to have him around alp
Comment Share
Share via:
JP

Posted Jan 14, 2021 at 06:07pm
i remember when i was young uncle tom took me to the coal country of pa to see his mom we spent time together n he took me to go on a tour of the coal mines i will always remember that as one of my all time favorites. i will miss him dearly i enjoyed the time i had with him in md reminising about old times n his xperiences. he did 1 other thing that i will be grateful for. after 30 plus yrs i was finally told the truth about many things i never knew n that was a blow to realize that due to the lies other people told me kept me frm more time with my uncle. but the 1 thing he did was set me free frm anger n hate. i love him dearly for that n praise him for he never spoke a dishonest word. he is with his many friends n with his heavenly father n he will feel no pain. he is at peace. i will miss him joey
Comment Share
Share via:
PN

Posted Jan 14, 2021 at 03:54pm
From: Piah Njeru ( piahga@yahoo.com )
Message:
Mr Carpenter whom, I called Pop pop was a great man, I was among the healthcare team during his last moments, Pop pop was a wonderful client I looked forward seeing every morning, happy smiley face and full of hope. He loved his breakfast and enjoyed his TV shows. He would tell me testimonies of how he worked as a veteran and the freedom we have now is because of him being part of that team, and am not surprised the kindness he received during his last journey by the team is because of how he showed love, kindness and he got it in return. Pop pop was a man of faith, he didn't just live but he had a relationship with his maker, Pop pop is absent with us now but he's in the presence of his Maker.Pop pop we salute and celebrate you. Audrey and Family, may the good Lord continue to strengthen you and give you peace that surpasses understanding.

I met Tom a few months ago. What an amazing man! At 91 he was ready to jump on the keyboard as soon as he heard a computer booting! He always (up until the near the end) had a greeting or smile for me.

My fondest memory involving Tom is this one. Trimming the Christmas tree with Tom, Audrey and Brianna (Brianna was baking). Once the tree was decorated, with Tom and I looking on, Audrey went to place the star at the top of the tree. Standing on a step stool, she got up on her toes and leaning toward the tree (at a very precarious angle) tussled with it to get the star on top (and straight). I’ll admit that for a while, I thought we’d all get to experience the tree up close and personal with it falling on us.
All’s well that ends well. The star topped the tree, the tree glimmered joyfully and any battles were relegated to Tom’s cat Trixie attacking Christmas balls and M.A.S.H. On T.V. ( With the star secured, Tom announced that it was time for him to get back to watching his (T.V.) Program - no more Christmas music)
Maybe he was concerned that Audrey would go for another round with the tree if it kept playing.

Audrey you sacrificed for Pop Pop. He had to but call out and you were there. I know he thanks you (from heaven).
Comment Share
Share via: 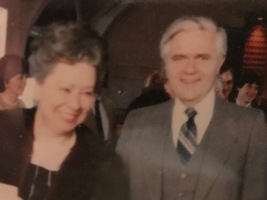