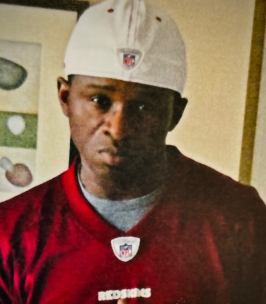 Wilfried Apollinaire Dondon Kombawa passed away peacefully on Wednesday, August 17th, 2022. He was born on September 1, 1974 in the Central African Republic.

His early years of school were spent in Morocco. His education continued at the Lycee Jules Ferry High School in Rouen, France. Later he earned an Associate Degree at the University of Jean Moulin in Lyon III, France. Between 1997 and 2000 he completed his education at the Institute of Technology in Roanne, earning a Commercial Technical Degree.

After moving to the United States in 2002, Wilfried started a career in the automotive industry working at Carmax and later at Tesla. He assumed the role of father with his firstborn Luc Dondon. This event was followed by the births of his two daughters Chole and Candice Dondon.

His interests included music,, especially African music, rugby and football. He had played rugby for most of his high school years, and later professionally. After his professional rugby career drew to a close, he continued to support his favorite football team, the Washington Redskins (Washington Commanders).

Wilfried was known for his high spirit, and a strong willingness to help others, and an ambition that could be seen in his work ethic and the passion he expressed in simple conversations. His light will be missed dearly but his memory will live on as he is survived by his three children and other family members.